Every tool published on this page is able to run on any Windows system (> 3.11), if there is no contradiction mentioned.
The language codes "de" and "en" specify which languages are supported. If one of them is in parentheses, only the documentation exists in this language, not the program. The "source" column contains the license under which the source of the program is published, or "-" for closed source programs.

VideLibri is an app to manage books borrowed in various libraries. For example it can show multiple library accounts simultanously, show a history of all ever lent books, warn of due dates, and renew everything automatically before the due date. All other OPAC-functions like searching for books are also supported.

To facilitate the usage of VideLibri with every existing library it is designed around a framework for automatic webpage querying. Thereby samples of the queried webpages (i.e. of the library OPAC) are annotated to mark the interesting parts and can directly be used to query those parts without requiring any programming. Since this is also useful for non-library webpages there is a command line version of VideLibri without any library functionality and a (non-book) library variant for Pascal.

VideLibri is platform-independent and has been tested on Windows, Linux and Android, as well as with 200 libraries. However, it is still only available in German.

VideLibri is hosted on its own page. jump to top

Xidel is a command line tool to query web pages. It replaces downloaders like wget or curl, text processors/parsers like grep, sed, xpath, xmlstarlet or jq, and the calling interpreters like bash or python.

The core of Xidel is a standard-conformant interpreter of XQuery 3.0, a Turing-complete programming language inspired by XPath and SQL. The type system of XQuery integrates XML (XML Schema, extended to HTML and JSON), so that elements can be directly accessed and manipulated, and you do not need any wrapper classes like DOM. Xidel has various extensions, e.g.: JSONiq or the HTML-pattern-matching developed for VideLibri, where samples of the queried web pages can be used like regular expressions. Another purpose of XQuery is creating markup, e.g. this webpage is created by Xidel.

Xidel is hosted on its own page.

Freeware
2009 - 2021*
An editor based on Texmaker which I made to write a book in LaTeX. It has become surprisingly popular and is hosted on texstudio.org.jump to top

Freeware
2002, 2008
APIM is like Spyxx and EDA a program which can read and set attributes of other windows, but in comparison to them APIM has much more features for changing properties.
The source is GPLed.
APIM has got these functions:

Freeware
2009
In a natural environment (outdoors) the light changes it shade of color during the day and controls biological processes (e.g. the sense of time). However, the computer monitor always has the same shade of color and thus disturbs the biorhythms.
Sun-Simulator solves this problem by altering the settings of the graphic card with the course of day and year, so that the monitor becomes more similar to the sun light.
Features: 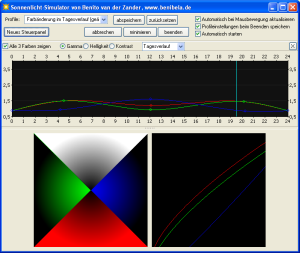 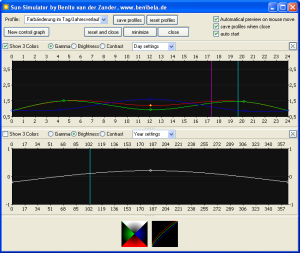 Freeware
2007 - 2010
"Just another XML Processor" is a script language with interpreter. Its purpose is the simple processing of XML files and the transforming to other formats.
You only need Java JRE 1.5 to run the program.

Freeware
2011
This is an inverse regex matcher that generates all strings which match a given regular expression. It supports all major expressions (e.g. "([abc]{2,3}|x+)\1").
It runs in two steps: First it splits the regex to a set of equivalent regexs that only use character classes and match strings of fixed size. Then it lists all possible ways to choose characters from the sets. This last step is heavily optimized, so it can generate several million strings per second. However, it has no real unicode support, since unicode characters have no fixed length.
It is a C++ command line program, runs on Linux (binary is for 64 bit only) and Windows, but requires Qt.

Freeware
2006 - 2012
BBMultiPlot can plot arbitrary mathematical functions and calculate their symbolic derivative. It can plot multivariate functions, by plotting the function for each possible value of the unknown variables within a certain range with different gradient colors.
It supports the usual arithmetic operations, +,-,*,/,^,|, and the sin, cos, tan, exp, ln, sqrt, abs, sign, int (= floor), asin, acos und atan functions. It's expression parsing is quite flexible, so you can write "4*x" as "4x", and omit trailing/leading brackets like in "x)+(7".
Sadly, I did not use a VCS while writing it, and kind of damaged the source while trying to port it from Windows/Delphi to Linux/Lazarus. The source archive below, is probably newer than the binary and has more features, but also more bugs. 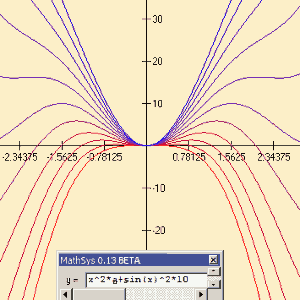 Freeware
2009 - 2010
This program can decode trivial transpositions ciphers (like anagrams) and monoalphabetic ciphers (like caesar), without knowing the key.
It does not use statistics to find a most likely plain text, but enumerates all possible texts. This has the disadvantage of finding many thousands texts on small inputs, and being too slow to find anything on large inputs. On the other hand you can be sure to not have missed anything.

The download contains word lists for German and English, and executables for Windows and Linux 32/64 bit. The GUI is on German, but the meaning should be obvious (Länge = length, Wort = word, ...).

Freeware
2007
You can use this program for addition, subtraction and multiplication of long integers on the Casio Algebra FX 2.0 Plus calculator. (Perhaps it also works on older models)

Freeware
2002 - 2003
This program displays a logical model of a gate circuit by representing each gate as a circle.
It understands all important logical functions (or, and, xor, nand, nor, not).
Each gate (except "not") can have an unlimited count of input and output connections, and it changes its color depending on the output value which is either true (=green) or false (=white).
In addition to the program there are two example circuits, a flip-flop memory and a 5-bit addition circuit.
The GPL-licensed source (23 KB) is a Delphi project

Freeware
2005
This is a relative simple file parser which can replace keywords in files and then save the files with another name.
It has these features:The parser doesn't have so much functions like others, for example like GNU Make, but because of this you can understand it without reading hundreds of pages.
However, the parser is not flexible, e.g. every transformation of one file creates the same result. Therefore I hava programmed JAXMLP, which is much more flexible, since it is a real programming language.
The source (17 KB) is a typical Delphi Project.

Freeware
2003
With the GUITools you can create WYSIWYG text, panel und view objects of the 3D Game Studio.
They are originally written for 3DGS 4 and 5, but there are almost no changes in the GUI parts of it, so they work in 3DGS 6.
Because it is a plugin, you need the GST-Builder 2.4.103 and the GSTHelper plugin 1.2.0, to use them.
They are like the GST-Builder bilingual and have a German and a English version.

Freeware
2001
MatheFix is mathematics program with these features:

Freeware
2001
TVB is a simple paint program with these functions:

Freeware
2001 - 2002
WDLSSG is a old editor for the script language of the 3D Game Studio.
It only supports 3DGS 4 and 5, and has no functions for 3DGS 6.
These are the most important features: